Imagine flying over London in the early nineteenth century, the cold bustling city going to sleep. Most lights are off, but gliding over to a small alley, you see a small apartment still awake in the night. You can just hear the clanking of machinery from outside. Inside the apartment, a genius inventor, Charles Babbage, and his “magical math fairy”, Ada Lovelace, work day and night on a computer 100 years ahead of their time, without electricity, without transistors, without funding. Charles Babbage was the inventor of this early computer. With his friend, Ada Lovelace, he built and programmed this remarkable machine. 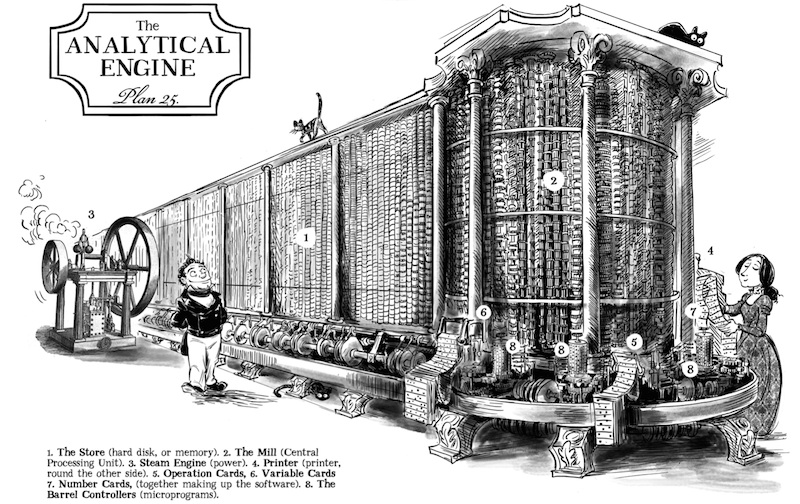 The Variable Card selected numbers either from the Store (memory) or from the punch cards, and puts the numbers on the Ingress Axis one at a time. The Ingress Axis read the numbers of the Central Wheels, and rotated the Barrels to arrange pegs for the sum. The barrels engaged their levers, connecting the Mill Gears to the Central Wheels, were there are several widgets for addition, subtraction, and other operations. The Mill Gears processed these operations, and feedback the instructions to the barrels, sending a result to the Egress Axis which either prints the results or adds them to memory.

For Babbage to express the number fifty five, he would have two cogs with ten numbers notched around the cogs, with the number five pointing out on each cog. To represent fifty five in binary, there would be six switches with these alignments: on on off on on on. Switches take up much less room than cogs, and that’s why we use them today. A computer chip has almost two thousand million switches in a square centimeter, but Babbage’s cogs only had a hundred in a square meter.

It is quite unfortunate the Analytical Engine never got completed. Babbage died an unhappy old man, without ever completing the wonderful Analytical Engine. According to Walter Isaacson, “Ada Lovelace … her life spiraled downward, and she became addicted to gambling and opiates.”3 However, a hundred years after Babbage’s lifetime the Analytical machine really was built from his blueprints, and you can see it at the Computer History Museum in Mountain View, California. Babbage also survives in steampunk culture, with many science fiction books and comics written after his remarkable invention.

Laika And Comrades: The Amazing Story Of The Soviet Space Missions

The Soviet space dogs were animals that the Soviets sent to space to test their ships. Fifteen dogs were sent [...]

Robert Washbourne - 4 years ago -
Hoverboards Do Exist, But Not In The Way You Imagine

The dream of flight has plagued humankind since we can remember. Leonardo Da Vinci, famous inventor, says: For once you [...]