The Octopus: What Do We Really Know? The octopus is a smart, curious creature. Even the largest octopus can squeeze through small openings in aquarium tops, and the octopus can survive outside the water for almost an hour. Jacques Cousteau once
reported that a friend’s escapee octopus was found in his library, paging through books, looking perfectly at home. Octopi are quite smart, as when Jacques Cousteau was filming a nature documentary the octopus he was filming on his ship formulated an escape strategy; climbing out of the tank, it felt for a table leg that it could not see, then slid down the table, dragged itself across the deck, and dropped into the sea. 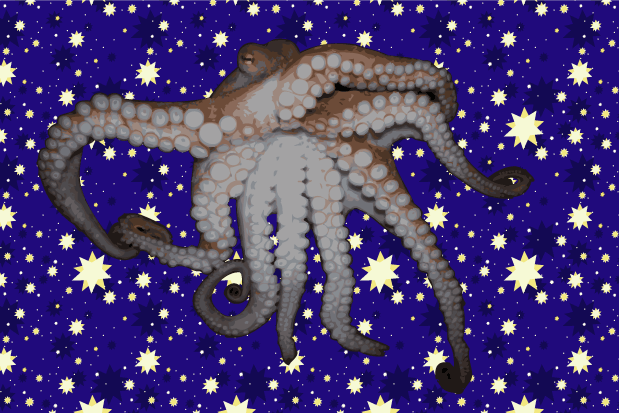 People have known the octopus for a long time. More than 2000 years ago, Aristotle recorded observations on the habits of the octopus. The ancient Egyptians show it in their hieroglyphs, the Greeks and Romans knew it well, and many authors mention it in their work. But what do we really know about the octopus?

Unfortunately, studies of other sea animals like sharks, salmon, and swordfish have been getting the most research money, and we are still in the dark on many aspects of the octopus.

The octopus has eight arms, joined at their bases by a web. The octopus’s mouth is like a birds, with a beaked mouth. Their arms can be regrown if they are lost in a fight, and many mature male octopuses are found with some arms smaller than others. The common octopus can reach a span of 10 feet (3 meters) at full growth, but is usually much smaller. The octopus has three hearts, and all its organs are held in their pouchlike head. The octopus cannot hear, but has a highly developed sense of sight with eyes that can see in all directions. The octopus’s saliva is paralyzing and flesh dissolving, and can melt preys flesh into tiny pieces. The octopus has neither bones or a shell, which enables it to squeeze into tiny holes to flee from predators. By contracting pigment containing skin cells, the octopus can change it’s color to match the surroundings.

The mother octopus is quite protective of it’s young, standing guard diligently, blowing water to keep circulating the water around it’s eggs. When the baby is hatched, it floats along with the plankton until it is large enough to sink, then hides itself in a seafloor crevice. The octopus never leaves its nest unless looking for food, or in the case of a male, for a mate. After finding a mate, the female bulks up on food before laying eggs. Since the octopus has no fat, the female becomes quite small from using its metabolism to feed the eggs. Soon the female and male octopus die, their young starting a new cycle.

How To Map Infinity To It's Reciprocal Using Trigonometry

[Redacted due to content errors and general stupidity] See alternative link about trig, triangles, and more Link to articles by [...]

Robert Washbourne - 4 years ago -
Changing Points Of View In Chemistry